If you leave me alone in the car…

I will be forced to find ways to amuse myself.

Fortunately, I am easily amused. Especially with my new phone and its awesome apps.

So, last week, Jared had to get his motorcycle appraised to see if it was totaled. But he had to drive it there. After I helped him with getting it on the borrowed trailer, a neighbor walked by.

And then I got out my phone and played with my photo apps some more. 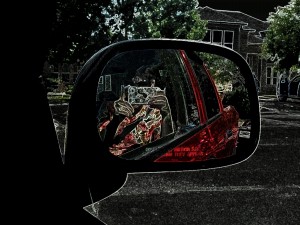 With another one of those fun “Paper Camera” modes for the photos. 🙂

Huzzah for the simple joys of life. That now involve a highly technical cell phone and fun applications on it.

(And by the way, if you were curious about the outcome of the bike, it’s officially totaled. You might have heard “Taps” playing softly in the distance, mixed with Jared’s sighs.)