Getting to the end of another year is bittersweet. While I am enormously grateful for all the things I have learned and experienced in the past year, it’s always amazing to me how time flies by. Wasn’t it just last week I was finishing up finals in college? And just a little before that, finishing high school? Good old nostalgia.

So, looking back at this year in a glance, here are some of the highlights:

January: I was still enjoying teaching in my new school. The “honeymoon phase” was almost over, but not quite.

February: The dogs got to experience a Texas snow day. And what’s not to love about watching dogs who are pansies in the normal wet stuff try and figure out how to navigate FROZEN WHITE wet stuff?!

March: brought one of my favorite holidays, Spring Break, and I learned how to make my first quilt… which I really will finish, one of these days!

April: School spirit abruptly changed as several people found out they would be losing jobs and that budget cuts were going to cause dramatic changes for the upcoming year (Thanks again for supporting Texas public education, Rick Perry. I’m sure you’d do even better over the nation.)

On a much happier note, Jared and I celebrated our 4th anniversary where he stole me away from work for a few days and we went to Fredericksburg, Texas and hiked at a local park, Enchanted Rock.

May: Jared got to celebrate his birthday in style, which unfortunately (for me) included getting his Ninja 636 bike. We also had a lovely visit from his grandparents, whom we hadn’t seen in years. We had a great time visiting the Lady Bird Wildflower Center. 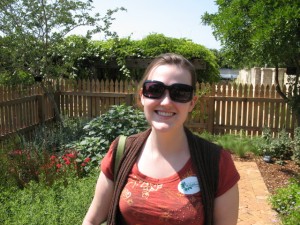 June: I had a wonderful opportunity to be involved with the Central Texas Writing Project. I learned a lot, had a chance to practice my writing more than I’ve had a reason to for years, and found strength to attempt another year of teaching 7th grade. Most importantly, I met some incredible, inspiring people that I connected with at a professional and personal level, which forever changed me.

July: was my down month (sort of). I had the chance to attempt some art projects, read some books, and squeezed in helping my district’s Young Writers Camp for a week.

August: Jared threw me a surprise party for my birthday, which made me feel like a princess. Just another reminder of how grateful I am for having him in my life. I also started my fourth year of teaching 7th grade, which was probably a bit of a mistake, looking back at the feelings of anxiety and discomfort I had been experiencing leading up to that moment. Hindsight now is 20/20.

September: We finally received rain. That deserves honorable mention because we had the worst drought recorded in Texas history. And my garden that I planted actually survived through it mostly intact enough for me to get a few things from it. I got a much needed new cell phone, which I have had a lot of fun with since. (How did people do it without cell phones? They are such amazing devices!)

Best of all, Jared’s work rented out a local theme park and we got another weekend away. Gotta love being spoiled like that.

October: Jared crashed his motorcycle on a race track during a track day, and fortunately, didn’t get hurt. While this isn’t exactly a “positive” highlight, as a wife, I can appreciate his safety a lot more than his need for speed. So while he was understandably upset about the whole situation, and I was sad for him, I was also not-so-secretly glad that he no longer had easy access to a dangerous vehicle.

November: Getting to see family and friends, some whom we had not seen in years, in Utah was a treat. More importantly, it did not snow while we were there, which meant we didn’t freeze to death! (Just kidding- seeing family was more important. Promise.)

December: is my favorite month. There’s just something about the holiday season that generally makes people kinder, and our world needs more of it. I got to spoil Jared for Christmas, which was fantastic, because I can’t usually surprise him like that. We were also lucky enough to sell the rest of his motorcycle gear for a pretty decent price. We also have had two weeks off from work and have just spent time with each other– and amazingly, we aren’t sick of each other yet! I love this guy so much.

All in all, I’ve learned a lot of important lessons in 2011, many of which I probably shouldn’t discuss in length on here. However, I can say that 2012 will be the biggest year yet! Major changes are in store, which I will discuss at length as things unfold in the near and far future. 🙂