There’s an app for that…

Jared has this habit of looking at apps for my phone. (He got me the good phone first, and so he’s constantly suffering from phone envy. Here’s hoping that he gets his own awesome smart phone soon…) So, he’s been looking at all sorts of things that I can download for my phone that he wishes that he could have on his own.

The other day, he came across this app called “Paper Camera” that was Amazon’s app of the day recently. Meaning that you can download the app for free when it normally costs money. He told me that I should check it out and see if I wanted to download it to my phone. I didn’t really have time to “check it out” but it sounded intriguing, so I went ahead and downloaded it (after all, it was free, right?).

What it does is takes pictures, but instantly converts them to different styles. Case in point: My classroom. 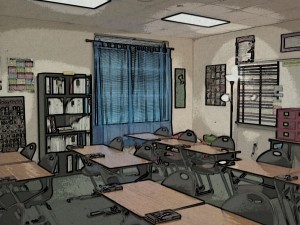 This is Comic Book style.

Neon Cola style- takes the colors and turns it into neon-light sign style. 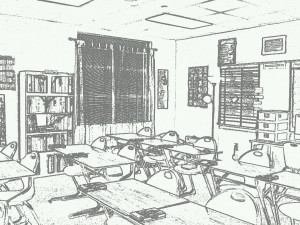 You just select the method, and it immediately shows in real-time what the image would look like BEFORE you even take the picture. Sweet, no?

Still not sold? Just check THIS out! 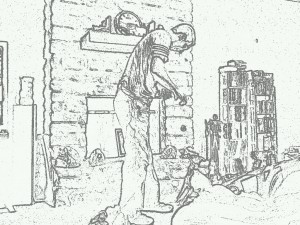 Jared and the pups in Con Tours mode. 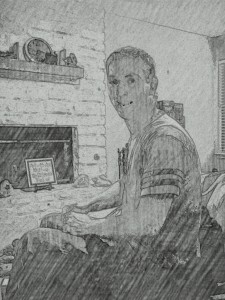 Jared in the family room- Sketch Up style

And if that doesn’t melt your heart, what normally looks like this: 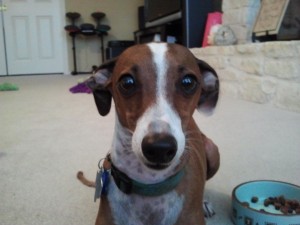 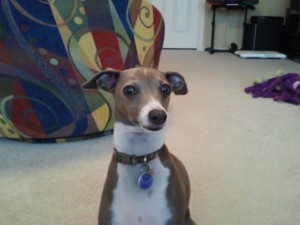 Okay, now you’ve got to admit it- that’s pretty dang awesome. And the subject matter therein is pretty much the dictionary definition of adorable.

The hazards of sitting too close to a teacher when grading… 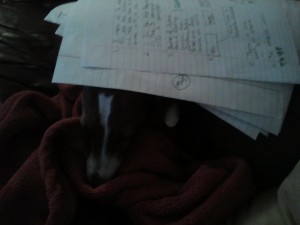 Don’t worry, no dogs were harmed in the grading of these papers.

Fortunately for Stevie, I didn’t put the REALLY big pile of graded papers on him. He only let me put about two classes worth of papers on him before he decided it wasn’t really a fan of being buried under them. So it goes.

Well, it’s week two of teaching, and I was home sick today with a nasty head cold, which compounded with the headaches I routinely get, makes for a bad case of vertigo and congestion. I suspected it Tuesday, and was readily confirmed yesterday. Throughout the day I felt worse and worse, and it didn’t help with everyone saying “Wow, you look terrible!”

I tried to make it to Open House last night, but after initial announcements, left for home because 1) I didn’t think I could stand for another minute and 2) I decided that meeting parents with a cold and potentially spreading it around would be worse protocol than not meeting them face to face. (Though I know one of the assistant principals disagreed with me on that…)

First, I am actually feeling significantly better. Like, I can taste food again and sort of smell through the half of my head that is not as congested. I might actually make it to work tomorrow!

Second, I got good cuddle time in with my dogs. There’s nothing like a nice snuggle from your puppies to make you feel a little bit better when you are down. They really enjoyed just cuddling up next to me in bed and on the couch throughout the day– my little couch potatoes.

Don’t they just melt your heart?

End of another visit

So, the past several days, we had my parents visit us here. Why anybody would want to visit Texas in the middle of summer, especially a Texas experiencing its third worst drought on record, is beyond me. We must just be worth it. Or perhaps it was just the lure of some cute grandpuppies.

Yes, Bonnie can and does sleep like that for long periods of time. But I digress.

Anyways, there was a lot of chillin’ around the house, but we did go out and do things, too.

The Parents arrived quite early Saturday morning (2:30 AM, to be precise). That meant we spent a lot of time recuperating. from a late night (and I cleaned most of the entire day Friday because I’m overly paranoid about people showing up and my house not looking nice, so I was tired too) and Saturday was a chill day.

Other things that occurred with the Parents here:

3. Went to the outlet mall

4. Went to the normal mall

5. Visited Jared’s work’s annual convention downtown and admired all the cool machinery and software wizardry that his work affects

6. Was given a balloon, card, and a cake as a pre-birthday present

7. Ate at some of the good restaurants around here that didn’t follow my diet

Honestly, it was just too hot to do much during the day here to do a lot of meaningful activities. Even with the air conditioning on full blast, traveling in the car is still miserably hot in 105+ degree temps. That plus the fact that the back to school deadline is looming over me, I was rather moody, cranky, and unpleasant to be around. Fortunately, I think the dogs’ cuteness made up for all of that, too.

Despite all of that, it was a good visit. Times like that make me sad that we live so far from all our family and old friends, even though we have new friends here.

Good thing I have these goofs to keep me company during those lonely moments!

So, I could go forward with my rant about how overused the word “epic” is. Or talk about how the South Beach diet is (not) going for me (First 5 lbs in like the first week, gone. Then in the following 3 weeks of faithfulness, only 5 more lbs. UGH.) But both of those aren’t very positive, and I need a non-negative post right now. Or at least something in that “neutral” zone.

So, a little history into the crafty side of Elisabeth. I like doing crafty stuff, but generally it’s non-typical crafty stuff. I’ve tried quilting, scrapbooking, and even photograph albums, but I’m just not the best with them. Story of my life.

During my senior year of high school, my totally awesome mythology teacher (yes, I got to take a whole year of MYTHOLOGY in high school. BEST. CLASS. EVER. And not because it was an “Easy A” sort of class, because it wasn’t.) had us do a mosaic project. We could take any subject in Greek/Roman mythology and make a mosaic of it, using whatever materials you’d like. So I took a picture of John W. Waterhouse that he made from The Odyssey.

(You can find “Penelope and the Suitors” and more from the John W. Waterhouse website.)

My teacher had an overhead of this picture, so I was able to project it up on the wall and do a rough sketch of what would fit on my posterboard I had been given to work with. Fifty hours -yes, really FIFTY 5-0 hours- later, after using up lots of beads, thread, yarn, glitter, and paper, I turned this in:

Most people really liked it. It was voted in the top 3 of however many students finished the assignment. That was pretty cool. My mom was really proud of it, and as a birthday present the next year, she got it framed all nice for me. It now sits on the wall in our dining room, even though every time I look at it I find ways I could have made it better.

Anyways, around the same time we moved into our house, I got the desire to make another mosaic, this time taking my inspiration from Greg Olsen’s art, White as Snow. It almost turned into a gift for somebody else, but after spending 10 hours just to finish Christ:

I knew that I would be too invested to give it away. Plus, shipping the thing would’ve been a pain. So instead, I gave her this, which was probably much more conveniently sized as well!) This time, the project took about 30 hours, mainly using various beads and stones and some twine. Not having to cut up colored paper into tiny sizes really cut back on the time. It sat around the house for awhile, until this past Valentine’s Day when Jared took it and me to the nearest Michaels store to get it framed. (And let me tell you, that isn’t cheap!) It now resides in our living room wall, looking like this:

Lately, I’ve been doing “glitter pictures,” something that I saw Martha Stewart (and no, trust me, I am no “Martha Stewart” housewife in ANY way or form) do on a Jay Leno show. Very random. But it’s fun. You take a picture, and then you glitterfy (new word!) it.

I take the picture, size it and print it out, then glue it to a canvas. After it dries, I glitterfy it. Since I haven’t had time the past year to do this sort of thing, it took me a bit of time to warm up to it, about 5 hours. But the finished result is pretty neat, yes? I’m working on one of Bonnie to see if I can “customize” it more.

Stinky Stevie has not been glitterfied yet. It’s probably a good thing he can’t read this blog, or he’d be offended I did Bonnie first. But he is a MAN dog, after all, and I’m pretty sure Jared would say being glitterfied is not manly.

Anyways, Jared thinks I should try doing this on one of those crafty websites and see if anybody would want to buy it, but I don’t know. What do YOU think?